DEFINITION: HOLOCAUST – SHOAH (Israeli term for Holocaust)
The Holocaust refers to a specific genocidal event in the 20th Century history: the state-sponsored, systematic persecution and annihilation of European Jewry by Nazi Germany and its collaborators between 1933 and 1945. Jews were the primary victims – 6 million were murdered; Gypsies, the handicapped, and Poles were also targeted for destruction or decimation for racial, ethnic, or national reasons. Millions more, including homosexuals, Jehovah’s Witnesses, Soviet prisoners of war, and political dissidents, also suffered grievous oppression and death under Nazi Tyranny.
United States Holocaust Memorial Museum. USHMM.org

CAUSES of the Holocaust
In Germany, in the century preceding the Nazi rise of power, antisemitism was linked to German nationalism and culture. Intellectuals, artists, and composers, such as Richard Wagner believed that Jews were innately incapable of being part of the true German nation. This idea directly impacted on Adolph Hitler.
Source: Excerpt from “Historical Overview” written by Dr. Michael Berenbaum

Sometime in the winter of 1940-41 a policy decision was made and crowned with a proper name “The Final Solution to
the Jewish Problem.” The “solution” envisioned was all too final, the murder of all Jews under German domination —
men, women, and children. Those who acted on this policy were certain that they were implementing the Fuhrer’s
[Adolph Hitler’s] will.

With the invasion of the Soviet Union in June of 1941, the slaughter began by mobile killing units, Einsatzgruppen, that
accompanying advancing German forces. They entered town after town, village after village, hamlets and even large
cities, rounded up the Jews, Gypsies, and Soviet Commissars and shot them one by one, bullet by bullet, person after
person. This process continued as the army advanced to the East and when the military situation stabilized the killing
units returned to finish off what had been left undone. Once again, they were to return in 1943, this time to dig up the
bodies and burn them to wipe out all evidence of their crime.

“At the time of the Wannsee Conference [January 1942] between 75-80% of the Jews who were to be murdered in
the Holocaust were still alive. By the spring of 1943, four of five of the Jews were dead.” Quote by Dr. Michael Berenbaum

RESULTS of the Holocaust 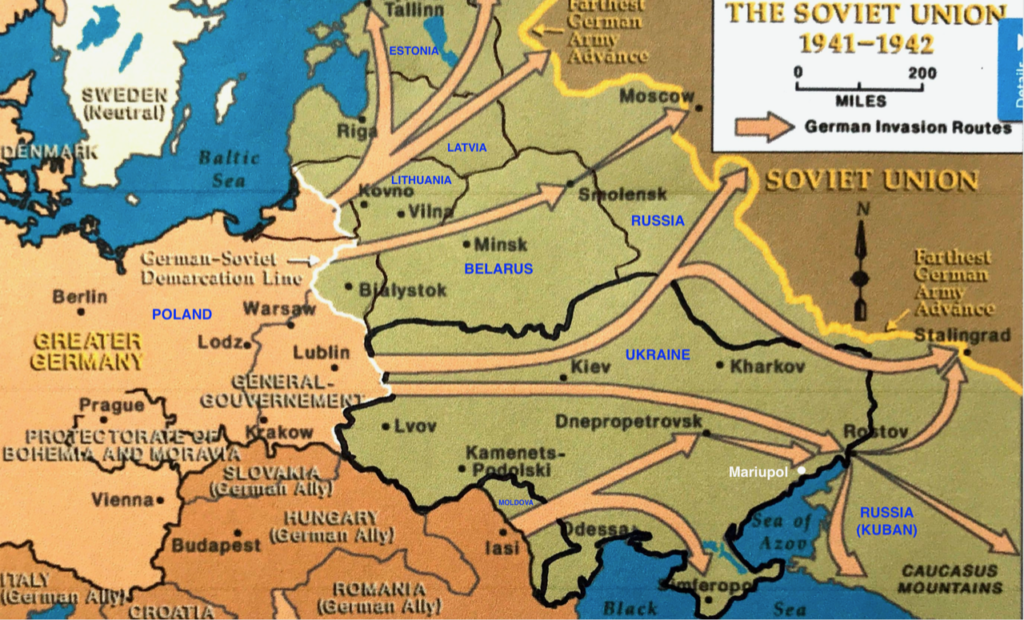 The map on top source: https://encyclopedia.ushmm.org/content/en/map/invasion-of-the-soviet-union-1941-1942
With countries overlaid by Kelly Bowen
The map on bottom source: https://encyclopedia.ushmm.org/content/en/map/einsatzgruppen-activity-in-the-ukraine
“For the survivor who chooses to testify, it is clear: his duty is to bear witness for the dead and for the living. He
has no right to deprive future generations of a past that belongs to our collective memory. To forget would be
not only dangerous but offensive; to forget the dead would be akin to killing them a second time,”
Quote from Elie Wiesel, a Nobel Peace Prize winner and Holocaust survivor who wrote the internationally acclaimed memoir Night

Proceeds will be used for the restoration of the remaining paintings. We greatly appreciate your support.